The Korean Wave as a form of soft power and in its aim of becoming one of the world’s leading exporters of culture along with Japanese and British culture, a niche that the United States has dominated for nearly a century.

Much of the success of the Korean Wave owes in part to the development of social networking services and online video sharing platforms such as YouTube, which have allowed the Korean entertainment industry to reach a sizeable overseas audience.

So Gangnam Style have becamed the first YouTube video to reach one billion views. The song’s music video has been viewed over 2.67 billion times on YouTube,[8] and has been YouTube’s most watched video since November 24, 2012, when it surpassed the music video for “Baby” by Justin Bieber.

Despite Korean wave show signs of an opulent country that has lunched itself into the one of global economic power. Brand new buildings with HD televisions blast commercials of scantily women selling perfume under which couples hurriedly shop between name-brand stores. However Korea’s mental health support system is broken. Each year, nearly 30 people out of 100,000 commit suicide in Korea. The most affected groups are students and senior citizens.

We try to figure out what is root cause of all of this. 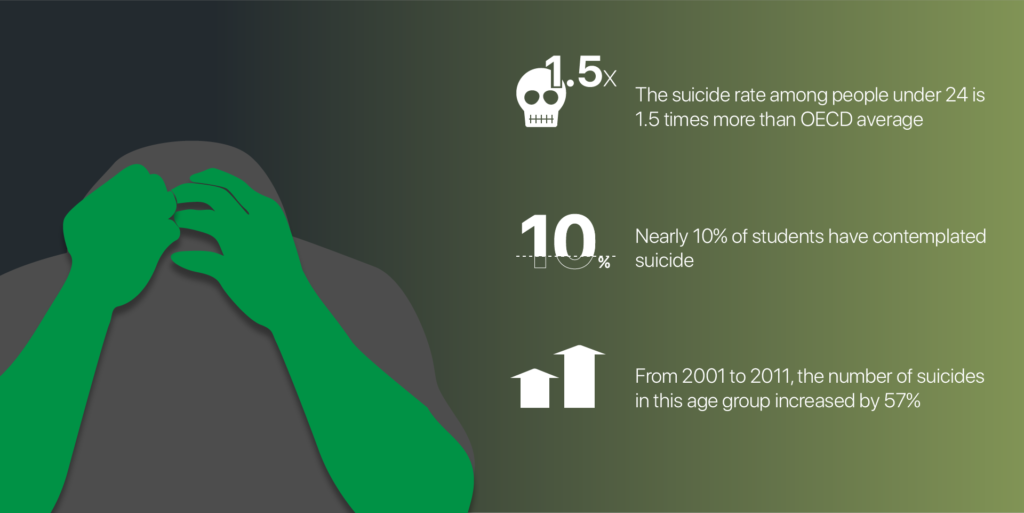 Over 50 senior citizens out of 100,000 commit suicide every year. That ‘s nearly twice the national average. The grand streets in the downtown Seoul, you will see an elderly person pulling a cart of goods to be recycled for mere cents. Just beyond her is an older gentleman doing the same but with cans he has carefully plucked out of the trash that were discarded by passing youth. Although their culture seems respect more with someone who has more age than you for example When dining with Koreans, the oldest always eats first. But it doesn’t mean you will get more favor form government support system.

Korea is a fiercely fast-paced country. Everyone is in a rush, everyone is stressed, everyone is looking out for themselves. They even don’t have patient to line up. The student concerns are always need to study harder,

Since the best companies will hire the good university if they complete with the same job. Then they will work hard until replaced by a cheaper, more educated graduate younger one. They are forced to retire young and endure a life where they receive a derisory old age pension. (€325 a month).

Meanwhile, the concept of “face” is very important. Koreans are an extremely proud people, and sometimes this pride transforms into white-hot nationalism.

Koreans in general have strong nationalistic views and as with most countries it is advisable not to bring up any historical events make negative comments about anything culturally in Korea. You see this nationalism displayed at sporting events, where thousands of Korean fans cheer their national teams on in unison, banging on drums and waving massive flags.

This nationalism especially comes to a boil whenever Japan is mentioned, as Japan has invaded them several times, and occupied Korea as a colony for almost the first half of the 20th century, decimating the country’s resources and conscripting thousands of their women as sex slaves.

The Korean wave may bring glamorous and creative image when you first approach Korean culture. Therefore, the stressful society and strong nationalism make the Korean are still conservative in general.

You must always retain a formality in the way that you manage people. Additionally, anyone older must be treated with great respect. The most senior business people make the decisions and these filter down the chain. The rest of the staff then execute the decisions in a practical sense. It is important to remember this is dependent on what level you are going into the business at.

Etiquette and social etiquette are also very important. A younger person would not usually manage older people and somebody with a lower social position would not usually manage somebody with a higher social position. These are useful conventions to remain aware of. Koreans business people devote a great deal of time and energy into getting to know the people with whom they are dealing in order to build long-term relationships.